This year the Awwwards conference takes place in Amsterdam in the beautiful “Tropeninstituut” and luckily I got a ticket!  The place is really beautiful and a great environment for a conference. The event is organised well. The coffee breaks (including croisants, donuts, cake & cookies) and lunch are also very nice (although 13.45 is a bit late for lunch). For readers who don’t know the awwwards: on their website they feature a lot of beautiful innovative websites. Just have a look: www.awwwards.com

Here are my experiences of day 1: 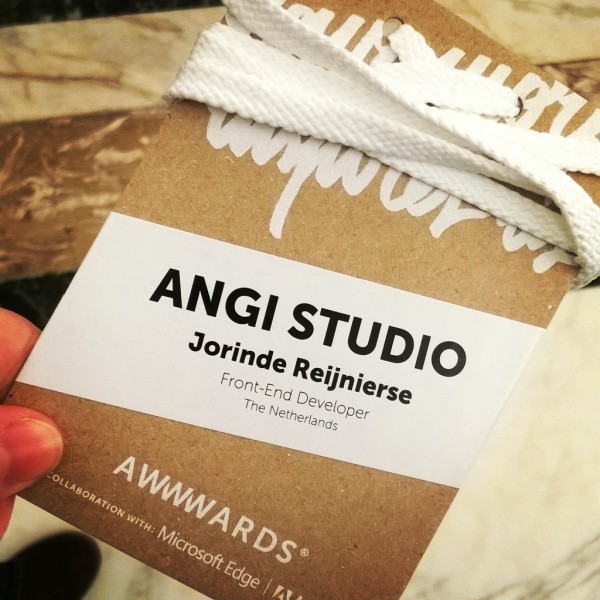 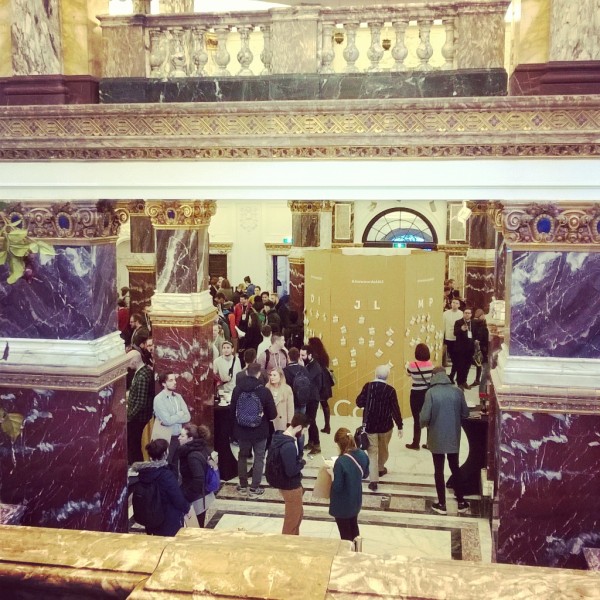 Intro
The first day of the conference started with a quick look at the web in the 90’s: websites filled with gif images and of course flash website. It was funny to see a couple of example of those website that were really ahead of their time back then. Josh Brewer – “The Centrality of Design”
The First talk of the day was about how design is playing a more prominent role in companies. Designers came out of their dark corners and became more involved in the company strategies. This is shown, not only by the number of CEOs that have a design background, but also the amount of design companies that are being acquired by big companies like Google and Facebook. The results of taking design as an important part of the brand also included in better company results. The talk also focused on how to use ux design and prototyping in a team. It is something to do together and therefore it can be very useful to use simple tools like pen and paper. Sketching is a language that everybody understands and therefore the ceos and other non-design people within a company can also easily be involved in the process and give their opinions in an early stage of the process.

Anrick Bregman – “Virtual Reality: Evolving Narratives”
This presentation focused on several virtual reality projects, Anrick was involved in, and their cons and pros. With virtual reality you’re not merely a viewer but also a part of a film. When making a virtual reality film there are questions to ask like ” who is the viewer?”. Unlike regular cinema you can’t expect somebody to focus on something in particular, because the viewer can look everywhere, so they are more likely to miss small vital details. Things like depth of field and focusing on details to get emotion are also things that work different in virtual reality. The way how to tell a story is very different than regular cinema. Also there is no ‘behind the camera’, everything is in view, so the whole process is quite different than regular film. Virtual reality is still quite new and also depending on available devices. Recent projects are therefore more small experimental studies than full narratives. But the future changes fast and so will the future of virtual reality. Josh Payton – “Missed Connections – A Look at History, Bureaucracy, Ecosystems and Execution”
Josh starts his presentation with the past: the world of the 90s and flash. Nowadays the internet has changed. We don’t just have a computer but we have phones and laptops: everything is connected. Personalization is now a big thing. From history Josh goes to “Bureaucracy”. As an example he shows the website, apps and kiosk interface of airline company “United’. Their website looks very old fashioned but their apps looks visually way better. But still it works very badly. This brings us to one of the quotes Josh mentions: “If it looks good, it should work good”. If you see a beautiful designed website you also expect it to work very well. Josh then talks about how to improve a website. A lot of company’s do a to b testing, but this only gives you the local maximum, not a better design overall. Don’t over rely on best practices. The web is constantly changing and best practices of a couple of years ago might not be best practices nowadays. Don’t always try to stick with what you have: “Improve it or remove it”. If you want something new you should analyze what you have done before: data > information > knowledge > understanding > wisdow. At the end of the presentation Josh also points out what a lot of other speakers also mentioned: a majority of the website look very much alike. They all use the same grid: Wide header with an image at the top, some text after that and after that the three blocks with text illustrated by icons. 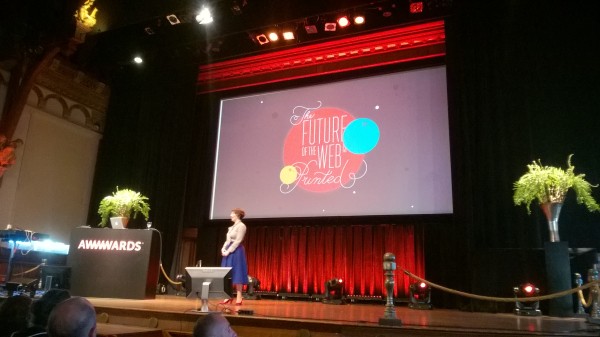 Chiara Aliotta – “The Future of the Web is Printed”
After the break there was a beautiful designed poster lying on my chair which was followed by a beautiful designed presentation. Chiara has an interesting point of view on how to take designs from the past and use them as inspiration for the modern web. “Webdesign is 95% typography” is a quote Chiara mentions. In a lot of cases this is true. Try turning off the font and a site will become completely different. Some brands rely on their typography. Coca Cola for instance took their design a bit further and created an online Design Machine for their sellers. In this tool sellers could easily use the coca cola branding to create new designs. This saves coca cola a lot of money and time because they don’t have to hire a designer now for every new thing. In the presentation she shows some great typography examples from the past from designers like H.N. Werkman, Karl Gerstner & Piet Zwart. Typography. Their designs are playfull and typography plays a big part in it. What we can learn from them is that they play around the grid. This is something we can apply in modern websites too. A lot of websites are based on a grid and framework like boostrap. By looking at printed designs and typography we can play around this grid and create visually more interesting websites. Material Design Icons by Google is a project where you can see the direct influence of the design of the past. The icon set is very much inspired by Otto Neurath & Gerard Arntz Isotype.

Hi-ReS! – “Let’s make the Internet great again!”
We all remember the time in the 90s when flash become popular. Flash was an empty canvas where you could do and make almost everything you wanted without being it depended on browsers. Nowadays we don’t use flash anymore and a lot of new options are there, like css3. But for some reason a lot of websites cling to the same idea and structure. This also happens in the movie industry. Movie websites used to have great artistic websites to make the people interested in a movie before it was released. As an example they showed the website of the movie “Requiem for a dream”. Nowadays people just look up a trailer on youtube and the artistic websites are sort of forgotten. It’s a pity that the web isn’t used that much anymore for artistic websites and pushing the boundaries of what’s possible. As an example they showed a website they made : Void. This interactive experimental project is not just about interaction from the user but also interaction of other users. On this project they got some comments that it isn’t working properly in every browser. But Hi-Res says in order to get things working in every browser you just have to start doing things in order to push the web forward.

Inayaili de León Persson – “Realistic responsive design”
This was for me the least interesting presentation of the day. In a list Inayaili presented the basics on how to work on a project: How to split things up, using post its, planning, prioritizing, testing, styleguides, user checks, etc. It’s interesting if you’re new to big projects or if you’re looking for a better way to handle projects but for me there was nothing new.

Vitaly Friedman – “Dirty Little Tricks From The Dark Corners of eCommerce”
This presentation was about the right and wrong ways to approach the check-out-cart of a webshop. Friedman is a great talker and even if eCommerce is not your expertise the talk was still very inspiring. In a couple of examples he showed in a very direct way the best practices like avoiding hidden costs, using local currency, dealing with choice paralysis , using both unit pricing and total pricing, sorting, filtering out used items, show complimentary projects (not the same products) as related products, quick cart access, quick access to recently viewed items, best practices for rating and pagination, etc. And also things you don’t think off straight away such as hiding the coupon field behind a link(50% of users will actually think a product is overprized if they see a coupon code field without having a coupon themselves) and tracking gestures (showing a pop over when scrolling up again for instance “do you want to add this to your cart?”). 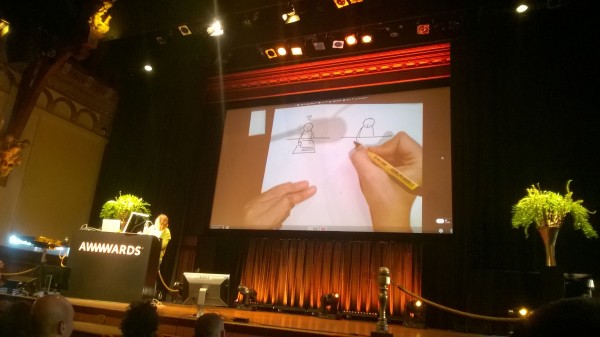 Eva-Lotta Lamm – “Kickstarting your Sketching and Visual Thinking skills”
After all the technology we’ve seen today the most difficult thing still seems to be connecting a laptop to a projector screen. After finally getting it to work there was no time anymore to show the slides so we went on straight to the sketching. Eva all wanted to participate in this so we would understand the meaning of sketching. It is not just for artist or children but for everyone. Sketching is a way to easily get your ideas out but also a very good way to organize notes and make them better scannable. The talk was more a workshop but it was very interesting and definitely inspired me to make more use of sketching and drawing small icons in notes.

Mediamonks – “Fusing Code and Celluloid: Why Agencies Should Integrate Film and Digital Production”
The last talk of the day was a presentation of several projects of mediamonks which illustrated the ways and shifts in the combination of film and code. At first it was more about personalization. This resulted in various projects where the main interaction was pasting a picture of your face into interactive websites or youtube videos. After that it shifted more to film content in a digital environment. As an example they show a project they did for Geox “ One Man For 7 Days In Nonstop Rain“: a video where users can react to. After that they showed a project where the interaction switched more to seduce and interact. This project was for barbeque brand Weber and on the website you could explore barbeque around the world through videos and learn how to barbecue different kinds of dished along the way. The latest developments in technology and experience move towards 360 degrees experience and virtual reality where the viewer becomes the participant. For this they showed a project they did for whisky brand Johnny Walker. In this project ‘Symphony in blue” you can move through interactive digital landscapes.